Every person can become two to three times stronger and heavy kettlebells are one of the most powerful means to make a man stronger – Ivan Lebedev (Russian Strongman, 1916)

A few weeks ago I bought Enter the Kettlebell: Strength Secrets of the Soviet Supermen.

The book opened my mind to a bunch of cool routines that I’ve never seen. It also showed me how incorporating kettlebells into my workout regime would make me stronger. Who doesn’t want to be stronger and lift more?

Most importantly, the book was written by Pavel Tsatsouline – the authority on all things kettlebell.

He’s been training special forces teams, like the US Navy SEALs and Soviet Spetnaz, since the 1980’s, and brought kettlebell training to the masses. I’ve gotten a lot of value from his blog and decided to pick up the book to support him.

Prior to reading this book I didn’t know much about kettlebells. I saw them at my gym all the time, sitting in the corner, untouched and gathering dust.

Very rarely did I see someone use them. For me the thought of using a kettlebell brought up images of an 80’s fad workout.

Besides, “it’s probably not even that challenging, right?“, I thought.

How wrong I was…

Some Basics: What is a Kettlebell?

It’s a cannonball with a handle. It’s an extreme handheld gym. Lifting a kettlebell is liberating and as aggressive as medieval swordplay – Pavel Tsatsouline

One pood, an old Russian unit of measure, is approximately 16 kg (35 pounds).

The most common sizes are:

You can get kettlebells that weigh somewhere between these sizes but 16 kg / 35 pounds is a good starting weight.

I know that 16 kg doesn’t sound like much but a kettlebell feels a lot heavier than its weight suggests.

Always start lighter until you master all the movements and then move up to the next weight. 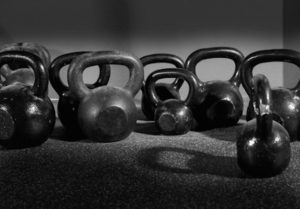 There are tonnes of benefits that come from kettlebell training. Pavel’s book provides 200 pages of quality, well researched information about the benefits of this tool. I could dedicate an entire post explaining them all but instead i’ll list some of the main benefits:

Kettlebell training is a form of resistance cardio. You get the benefits of strength training and cardio without having to waste time on the treadmill. In fact, when you swing kettlebells, your heart rate can raise as quick and as elevated as it would from any form of high intensity training.

Kettlebells will help you to throw better punches. If you box or train martial arts, you’ll be able to hit harder and more often. Exercising with kettlebells will allow you to build up better stamina in your shoulders. This keeps you from getting tired and throwing weak punches.

Kettlebell swings work your posterior chain. You are going to be developing a better back from this. While I like pull-ups and deadlifts, using a kettlebell is probably a safer option for people who are worried about back injuries. If you’re older, or have a weak back, kettlebell swings are most likely a better choice for you.

Forget about all the space needed for a bench, barbells and dumbbells. All you need is one kettlebell and some open space. That’s it. Quick and simple. Don’t forget that kettlebells hardly take up any room making them easy to store.

I still remember my first time training with kettlebells like it was yesterday.

I had finished reading Enter The Kettlebell and decided to complete the suggested workout*:

This workout is also referred to as the ‘program minimum’. Once the swing and get up are mastered there are plenty more movements to add.

* Note: I could have learnt some basic kettlebell routines and tips by watching some YouTube videos. However, A 1,000 word blog post or five-minute YouTube video will never give me as much detailed information as a 200 page book. Pavel’s book also presents an entire chapter on kettlebell safety – how to use them correctly to prevent injury; most blogs and videos skim this part.

“Just 2 simple exercises?” I thought. “This is going to be a walk in the park”.

It took only 3 minutes out of the 12 minutes of the first exercise for me to realise how greatly I had underestimated kettlebells.

My heart rate was racing and my shirt was soaking up a lot of sweat. After the 12 minutes were over I felt like I had run a marathon. Sweat was dripping from my forehead onto ground. My palms could no longer hold the kettlebell properly because they were sweaty. I was a mess.

I went on to complete part 2 of the workout and struggled. Who would have thought that standing up after lying down would be so hard? By the end of the get-ups I had created a giant sweat angel on the ground and my arms were burning.

The next day my entire body was sore.

It’s Not Just Me

… I accepted the inevitable, stood my ground and attacked the kettlebells as if they were my last dance on earth. I remember very little of the workout itself. I know we did swings, cleans and snatches, and that the workout lasted no more than seven minutes. I remember my heart beating so hard that I could feel it in my pelvic floor. The thing that stands out most in my mind was my prideful attempts to refrain from vomiting all over Mark Reifkind’s garage floor

The above quote is from Mike Castrogiovanni describing his kettlebell experience after being introduced to them by his strength coach, Mark Reifkind. He went in thinking training would be a walk in the park. Very quickly he learnt he too had underestimated the kettlebell.

My Thoughts About Kettlebell Training

What I love about kettlebells is their versatility.

This one tool can work your whole body. And while it isn’t as good, in my opinion, as actual weights, you’ll still get a great workout from them.

When you’re short on time or simply aren’t “feeling it” you can be done with your workout for the day in under 20 minutes.

Another bonus is that, unlike most barbell lifts, your height does not make the movements harder.

Since my first experience with the kettlebells I have since incorporated them into my routine. It’s not uncommon for me to add a few rounds of swings, get-ups, overhead press, cleans and squats as part of my routine. It’s too early to call it but I already feel that my overall strength and endurance is improving. I can do more swings for longer and complete the workout faster. My overhead press and bench press numbers have gone up, when previously plateaued, and I swear my lower belly is looking more defined.

I’ll continue training with kettlebells and will post an update on my progress in a months time.

Are Kettlebells Right For Me?

If you are still uncertain whether you should add kettlebells to your routine check out this great video by Elliott Hulse:

If you want to learn everything there is to know about kettlebells and want an easy to follow program then Pavel’s book is perfect for you.

Costing only $7.75 on Amazon you’ll get 200 pages of content. Even if you only get a handful of new techniques from the book it will still be worth the money. Seven bucks is less than a giant coffee from Starbucks.

Stand tall, be proud of your height and strive for greatness.

By Art of Tall Time to read: 7 min 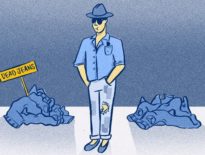 Tall Clothing Goodbye Levi’s 508: The Death of the Perfect Jea…
0